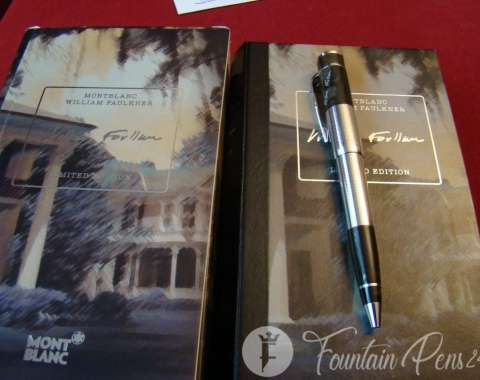 The Writers Edition “William Faulkner” is dedicated to the literary master of modernism. The shape and surface of this unique writing instrument are reminiscent of the novelist’s early creative period and the style of art déco. The black-brown precious resin, shimmering like mother-of-pearl, meets the bright brilliance of the platinum finish with its subtle ring structure. This represents a shift in point of view as we encounter it in Faulkner’s works.

The hand-crafted nib is particularly distinct. It is a reference to another great passion of the writer: aerobatics. Faulkner’s biplane glides through layer after layer of clouds on the platinum-plated 18-K gold nib.

William Faulkner was one of the most significant American novelists of the 20th century. In his more than 50 books – novels, short stories and anthologies – he described again and again the beauty and tragedy of his homeland by the Mississippi River. Faulkner was driven by the literary urge “to cram all of human history into one sentence”. To this day he thus manages to draw his readers into a maelstrom of dramatic destinies, deteriorated values, violence and death, guilt and punishment.

It is to his avant-garde experiments with new stylistic elements, interwoven plots and complex shifts in points of view that the two-time Pulitzer Prize winner owes his international fame – and the Nobel Prize for Literature in 1949.

Other articles
You want your advertising to come out here, click here.
We price your products for free

back to top
Sell
©2018 FountainPens24. All Copyrights reserved.