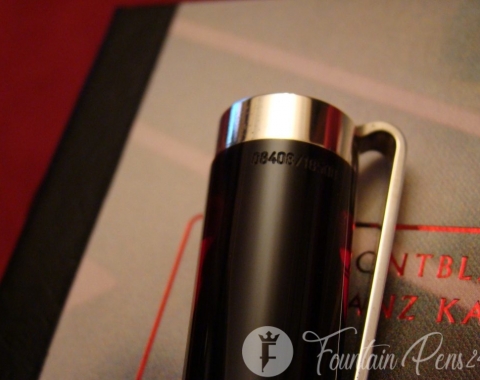 The design of the Writers Edition Franz Kafka is not only reminiscent of the simple and yet artful style of its eponym, but also pays tribute to Kafka’s most famous work: “The Metamorphosis”. In the fascinating change from square to round in the writing instrument’s form, the metamorphosis described in Kafka’s story has found its equivalent.

Top, clip and rings made of 925 sterling silver offer a thrilling contrast to the dark red translucent aura of the barrel. A further reference to “The Metamorphosis” is on the rhodium-plated 18-karat gold nib: a finely engraved cockroach.

With masterworks such as “The Trial”, “The Judgement” and “The Metamorphosis”, Franz Kafka became the literary model of a whole generation. Having died young from a severe disease, the crosser of literary frontiers between dream and reality did not, however, come to enjoy a worldwide reputation until after 1945: in the following years, his unique writing style made literary history with the notion of the “Kafkaesque”.

Other articles
You want your advertising to come out here, click here.
We price your products for free

back to top
Sell
©2018 FountainPens24. All Copyrights reserved.