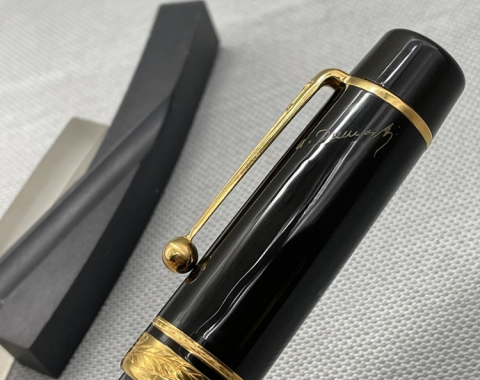 Fountain Pen of the Writers Edition

Signed wrong A. Dumas of the sun

Limited series with the number 009834 of 20000 in commemoration of the great writer Alexander Dumas.

And only a few with the wrong sign of the Son A. Dumas

The writing instruments of the Alexander Dumas model of the Writers Edition are as perfect as the work of this great novelist. Created from the finest materials, they have a mysterious appearance with a slight glow, enhanced by a dark brown noble resin cap. At the top, every detail emphasizes the personality of Alexander Dumas: the clip with the distinctive sword symbol, the rhodium-plated 18-karat gold nib, decorated with a fine fleur-de-lis engraving, and the gold-colored signature. on the cap.

The first copies of the Alejandro Dumas model that were made by mistake were signed by his Son, an error that has made this version a rare copy for collectors.

Alexander Dumas was one of the most important novelists and authors of theatrical works of the 19th century. He knew better than anyone how to combine effective dialogue, dramatic tension, and lucid description into gripping stories

Other articles
You want your advertising to come out here, click here.
We price your products for free
back to top
Sell
©2018 FountainPens24. All Copyrights reserved.